Zygote in my coffee

(Redirected from Zygote in my Coffee)
Jump to: navigation, search 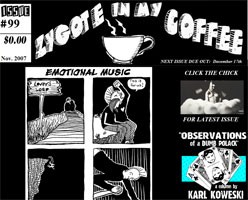 Zygote in my Coffee Issue #99 Cover

Zygote in my Coffee debuted on December 31, 2003. It was founded by poet and cartoonist Brian Fugett. Fugett wanted to create an edgy, progressive medium/forum for independent poets/writers/artists to express themselves. Fugett was the sole editor/designer of Zygote until Karl Koweksi, author of Zygote’s regular column, “Observations of a Dumb Polack”, joined him as co-editor in early 2007. Aleathia Drehmer followed in early 2008 and C. Allen Rearick has been named as a third co-editor.

Zygote in my Coffee was originally based out of San Jose, California and later moved to San Francisco briefly. Fugett later moved and published out of Kettering, Ohio.[3]

The print edition of Zygote in my Coffee was added to the lineup in 2006. Zygote published its 100th online issue on January 1, 2008. A special commemorative print edition was also published.

After five years the magazine announced its defunct status in late 2008 but later resumed publication with a slightly limited schedule.[4]

Zygote has featured comic strips since its early issues. Favorites such as “That Little Prick” and “Danny’s Big Banana!” were created by Brian Fugett.

Zygote has been the home to many online chapbooks from contributors such as Justin Hyde, Paul Corman-Roberts, J.J. Campbell and Bradley Mason Hamlin.

Columns on Zygote in my Coffee have included “Observations of a Dumb Polack” by Karl Koweski, “Zen and the Art of Drinking” by Bradley Mason Hamlin and “Bat Shit Crazy” by Misti Rainwater-Lites.