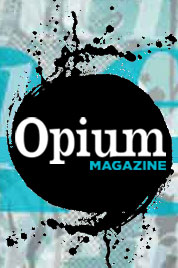 Opium hosts the Literary Death Match, a competitive, humor-centric reading series that features four writers in a read-off, all critiqued by three judges. Opium Europe features all-new content written solely by Europeans, in both French and English, both online and off. Opium Studio, scheduled to open in Spring 2009, is a virtual art gallery that showcases everything from wit-inspired cartoons to paintings to collage to sculpture. Opium Live is an interview series that features interviews with authors and artists.

In June 2009, Opium launched Opium 8, "The Infinity Issue," featuring conceptual artist Jonathan Keats and "The Longest Story Ever Told."[1] To create this nine-word story, Keats used a double layer of black ink and masked the words with an incrementally screened overlay. It can be read at a pace of one word per century, or as ultraviolet light fades the overlay.[2] According to the artist, the reading of this story is predicted to take one thousand years.[3] Keats' work is covered worldwide including in America, Brazil, Russia,[4] the UK,[5] Turkey, Japan, and France.[6]